What is frozen shoulder?

Frozen shoulder is a condition that causes the shoulder to be extremely painful and stiff. It is also sometimes referred to as adhesive capsulitis. The condition itself can take a long time to resolve and in some circumstances, can take up to 24 months to resolve. The shoulder joint is surrounded by a lining that is normally soft and very flexible. In frozen shoulder, this lining becomes very inflamed and swollen resulting in the pain. In the long term, the lining becomes scarred resulting in shoulder stiffness.

Who can develop frozen shoulder?

Frozen shoulder is a very poorly understood condition. It can happen spontaneously without any obvious trauma and is strongly associated with other medical conditions such as Diabetes, thyroid disease, high cholesterol levels and heart diseases. The female population, particularly in the fourth or fifth decade of life, is also at higher risk of developing frozen shoulder compared to males. Occasionally, adhesive capsulitis can also develop following shoulder operations.

What are the symptoms of frozen shoulder?

There are three distinct phases of frozen shoulder; the freezing, frozen and thawing phases.

In the first stage, also known as freezing stage, the lining around the joint becomes inflamed and swollen and this results in severe pain to the affected shoulder. The pain is often described as a dull pain that is present, even at rest or when the shoulder is not moving. Movement of the shoulder itself is not affected in this phase. This phase can last for up to nine months.

In the final phase, the thawing stage, pain is no longer the dominating symptom. The stiffness starts to resolve and can last anywhere between twelve months to several years. It is important to note that most patients who suffer from frozen shoulder do not recover all the movement that they had prior to suffering from frozen shoulder.

How is frozen shoulder treated?

Non-surgical treatment is the mainstay of treatment for adhesive capsulitis. This is based around managing the pain to allow patients to participate in physiotherapy. If standard strong painkillers are not sufficient to control the pain, an injection to the shoulder joint can be performed.  Most patients that suffer from adhesive capsulitis are managed in this manner.

Rarely, despite efforts with physiotherapy, patients are unable to achieve acceptable shoulder range of motion. In this case, surgery can be performed to help restore shoulder movement. Surgery is rarely offered in the early phases of the condition.

Manipulation under anaesthesia (MUA) of the shoulder is one option of treatment following failed conservative treatment. During an MUA, the shoulder is put under steady force to help stretch the stiff and scarred capsule. This procedure is performed under general anaesthesia and no cuts are made on the skin. If this procedure does not yield satisfactory result, then a keyhole operation to surgically release the stiff and scarred capsule. Often an MUA of the shoulder is also performed following a surgical release of the capsule. 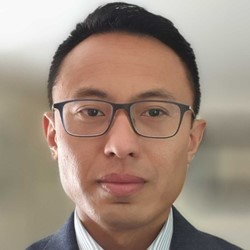 Mr Nik Bakti is a Fellowship trained Consultant Orthopaedic Shoulder and Elbow Surgeon based at One Ashford Hospital. He has a particular interest in arthroscopic surgery and shoulder replacement operations. To learn more on Mr Bakti, click here

To book a consultation or learn more about frozen shoulder and the services we provide, contact the hospital direct on 01233 423 303 or email us