Fibroids are muscular growths that grow in or around the womb (uterus) and are usually benign (non-cancerous).  The growths are made up of fibrous tissue and muscle, varying in size and number.  They can grow as a single tumour from the size of a pea, to numerous developing in the uterus, growing to the size of a grapefruit.

In many cases, women are unaware that they have fibroids due to the lack of symptoms.  In some circumstances however, if the tumours are larger, they may cause severe abdominal pain and heavy periods.  Fibroids are also known by the following names:

The classification of a fibroid depends on its location in the womb. The main types of fibroids are:

Intramural fibroids are the most common types of fibroids that develops in the muscle wall of the womb.

Subserosal fibroids develop beyond the wall of the womb, grow within the surrounding outer tissue layer into the pelvis, and can become very large.

Submucosal fibroids that develop in the muscle layer beneath the inner lining of the uterus can push and grow into the cavity of the womb.  They are usually found in the muscle beneath the inner lining of the wall.  In certain cases, subserosal or submucosal fibroids attach to the womb with a thin stem of tissue.  These are known as pedunculated fibroids.

Cervical fibroids grow in the neck of the womb (cervix).

Around 1 in 3 women experience symptoms related to fibroids. These symptoms may include: 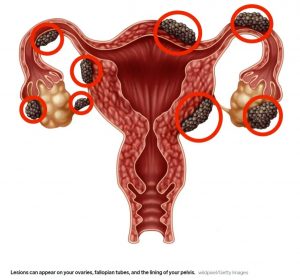 In rare cases, complications caused by fibroids can affect pregnancy or cause infertility.

Your symptoms, if experienced, will depend on the number of tumours you have as well as their size and location.  If you have a small tumour or you are going through menopause, you may not experience any symptoms.  Fibroids can shrink during and after menopause.  This is due to the face that women going through menopause experience a drop in their oestrogen levels and progesterone hormones that encourage fibroid growth.

It is unclear what causes fibroids.  It is known that they are controlled by hormones, oestrogen and progesterone and can grow rapidly during pregnancy, when hormone levels are increased.  They shrink when anti-hormone medication is taken and can stop growing during and after menopause.  Factors that can increase the risk of developing fibroids include:

The ovaries produce the hormones oestrogen and progesterone.  They cause the inner layer of the uterus to regenerate during each menstrual cycle and can stimulate the growth of fibroids.

If your mother, sister, or grandmother has a history of fibroids, you may be at a higher risk of developing them.

Fibroids may develop and grow rapidly during pregnancy due to the increased production of oestrogen and progesterone.

Fibroids become more common as women age, particularly during the 30s and 40s.

Women who are overweight are at a higher risk of developing fibroids.

Limiting the amount of red meat in your diet such as beef or ham may help you decrease the risk of developing fibroids.

Fibroids can be discovered when you visit your doctor for a regular pelvic examination to check your uterus, ovaries and vagina.  The doctor may be able to feel the fibroid during the exam as a lump on the uterus.  The examination is used to check the condition, shape and size of your uterus.  If a suspected fibroid is discovered, you may need to undergo further tests, such as:

A hysteroscopy uses a long, thin telescope with a light and camera at the end (hysterscope) to examine the inside of your womb through the vagina and the cervix.  A local or general anaesthetic can be used so you will not feel any pain during the procedure but in most cases, you will not require an anaesthetic.  If necessary, the doctor can take a biopsy at the same time to identify potentially cancerous cells.

During a laparoscopy, your doctor will make a small incision into your abdomen and insert a laparoscope (a small telescope with a light and a camera at the end).  The camera then transmits images from the inside of your abdomen or pelvis to a monitor for examination.  General anaesthetic can be used, so you will be asleep during the procedure and will not feel any pain.

In some cases, a small tissue sample (biopsy) may be taken during a hysteroscopy or laparoscopy for closer examination under a microscope.

Treatment is only suggested for women experiencing symptoms due to fibroids.  If the fibroids are not affecting your quality of life, treatment may not be necessary. When treatment is recommended, it can take the form of medication or surgery.  The severity of symptoms, your age, location of the fibroids and any plans to have children can all affect the course of treatment.

The first line of treatment for fibroids is medication.  Over the counter drugs such as ibuprofen can be used to help manage mild pain.  If you are experiencing heavy bleeding during your period, taking an iron supplement can help prevent anaemia or help if you are already anaemic.

A drug known as a gonadotropin-releasing hormone agonist (GnRHa) makes the body produce less oestrogen and progesterone that shrinks fibroids.  GnRHa stops the menstrual cycle but does not affect fertility following the end of treatment.  GnRHa can result in menopause-like symptoms, such as hot flashes, vaginal dryness, excessive sweating, and a higher risk of osteoporosis.  GnRHa are only for short-term use and can be given prior to surgery to shrink the fibroids.

Levonorgestrel intrauterine system (LNG-IUS) is a small plastic T-shaped device positioned inside the womb.  It releases a hormone called levonorgestrel over an extended period.  The hormone prevents the inside lining of the womb from growing too quickly, which decreases menstrual bleeding.

If you have fibroids with moderate or severe symptoms and conservative methods have failed, surgery may be the best course of action to treat them.  The main surgical procedures recommended to treat fibroids include:

Myomectomy is a surgical procedure used to remove fibroids from the wall of your uterus that does not involve taking out any healthy tissue.  It is recommended instead of a hysterectomy for women who wish to have children following treatment for fibroids. You can still have children following a myomectomy, but if your fibroids are rooted deeply in the uterus, you may need a caesarean section to deliver.

A myomectomy is carried out in a number of ways.  It can be major surgery (involving an incision into the abdomen) or performed with laparoscopy or hysteroscopy. The technique of surgery used depends on the type, size, and location of the fibroids.  An abdominal myomectomy includes making a large incision in the abdomen to reach the uterus and remove the fibroids.  The laparoscopic technique involves making a few small incisions into which surgical tools and a camera are inserted.

Myomectomies are carried out under general anaesthetic.  You will usually have to stay in hospital for a few days following the procedure and will be advised to rest for several weeks whilst in recovery.  Myomectomies are usually an effective treatment for fibroids although there is a chance that fibroids will grow back and further surgery will be required.

A hysterectomy is a surgical procedure to remove the uterus and is the most effective technique to prevent fibroids from growing back.  Fibroids are the most common reason that a hysterectomy is carried out and is usually recommended when you have large fibroids or severe bleeding and do not have plans for any/more children.

A hysterectomy to remove the uterus can be carried out either through the vagina or through small incisions in your abdomen. Depending on the technique used, an epidural anaesthetic, spinal anaesthetic or a general anaesthetic are used.  If the fibroids are smaller, your doctor may be able to reach the uterus through the vagina rather than making incisions in the abdomen.  Removal of the ovaries and cervix is usually an option at the time of the hysterectomy.

In some circumstances, a hysterectomy is performed through a laparoscope.  If you do not have your ovaries removed, you will not begin menopause at the time of the procedure.  You will usually need to stay in hospital for a few days following a hysterectomy with full recovery taking 6 – 8 weeks.  If your ovaries have been removed, it is possible that you could start an early menopause.

Hysteroscopic endometrial ablation is a relatively minor procedure, carried out in an outpatient setting where the lining of the uterus is removed or destroyed to help manage very heavy bleeding.  It is typically carried out to reduce heavy bleeding in women without fibroids, but it can be used to help treat small fibroids in the lining of the uterus. The procedure can be performed under local or general anaesthetic and is a fairly quick procedure, taking approximately 20 minutes.  The procedure can be performed in a number of ways such as with a laser, wire loops, boiling water, electric current, microwaves and freezing.

About 50% of women who undergo this procedure have no more menstrual bleeding and about 3 in 10 women experience much lighter bleeding.  It is not impossible to get pregnant following endometrial ablation; however, the procedure is not recommended for women you would like to have children, due to the high risk of serious problems such as miscarriage.

In most cases, you will not experience problems following surgery to treat fibroids.  However, as with any invasive surgery, there is always a risk of complications such as:

Fibroids usually develop during the reproductive years of 16 – 50 when your oestrogen levels are higher, affecting around 30% of women by the age of 35.  Your prognosis will depend on the location and size of your fibroids.  If they are small or you have no symptoms, you may not require treatment.  If you are pregnant and have fibroids, your doctor will monitor your condition, however, in most cases, fibroids do not cause problems during pregnancy.

Our Consultant Gynaecologists are highly experienced in diagnosing and treating women that are currently experiencing fibroids, with our medical team and nursing staff offering support in a sensitive and caring manner at all times.

To make an appointment to see a Consultant Gynaecologist consultant, please contact the reservations team on 01233 364 036 or email ashford.info@onehealthcare.co.uk

One Ashford Hospital is located in Kent and is ideal for private, insured and NHS patients located in Ashford, Dover, Canterbury, Folkestone, Maidstone and all nearby areas.