Globus sensation is the feeling of having a lump, bump, or swelling in the throat without there actually being one. Mr Chris Theokli, Consultant ENT Surgeon at One Ashford Hospital discusses common symptoms, causes and how Globus can be treated.

What are the Symptoms of Globus?

The most common symptom is a feeling of a lump in the throat. People can often describe this as a pressure, or a sense of tightness. Sometimes, people report that their throat is in spasm or that mucus accumulates in the throat which they are unable to get rid of. Because of this feeling, people often report that they must throat clear, but nothing ‘comes up’. Their throat could become dry and sensitive which leads to a chronic, irritable cough. This again is a common symptom of Globus. These sensations can increase with stress and worry. Patients often report at this point that their voice might become hoarse if they talk for long periods of time. Often, this adds further anxiety to what is already a stressful situation.

The most common cause of Globus is thought to be acid reflux. Acid is produced in the stomach but on occasion it can escape and travel up the food pipe (the oesophagus) and overspill in the throat causing irritation. This process is called reflux. Sometimes it doesn’t cause any of the classic symptoms of reflux such as heartburn or indigestion and only causes throat symptoms. This is known as silent reflux and is commonly seen in patients who have Globus symptoms. Acid reflux interferes with how your swallowing muscles relax, leading to a feeling of tightness and constriction which can lead to Globus.

Acid reflux is not the only cause, however. Sometimes there can be a low-grade infection present in the throat, such as thrush, which can also be easily treated. Sometimes the sense of mucus in throat can originate from the nose in the form of post-nasal drip. This is where excess mucus in the nose drips down the back of the throat.

On occasion, when we examine patients, no abnormalities are found. This too is common but it is often very reassuring for patients that they have been investigated and examined to ensure the cause is not a sinister one such as cancer; this is a common worry for patients who have these symptoms and often by having a thorough examination the reassurance they receive is enough to allow them to relax and symptoms can actually settle on their own accord.

What are the Investigations for Globus?

If patients have symptoms consistent with Globus they will require referral to an Ear, Nose and Throat (ENT) Consultant to ensure there are no other conditions that could explain their symptoms. A full, careful history will be taken and then a thorough clinical examination of the throat will take place. This is done by performing a camera test called “flexible Nasendoscopy”. A small, flexible camera is inserted into the nose and passed to the back of the nose and hovers at the top of the throat. From here the whole of the throat (the pharynx and larynx) are visualised and any abnormalities can be confidently seen. The whole process itself takes less than a minute to perform. Usually, no local anaesthetic is required and patients only normally say it feels a little uncomfortable as it passes through the nose and brings a little tear to their eye.

Often this is all that is required to make a diagnosis. If any other investigations are required subsequently, then this can be discussed at the time with the patient.

What are the Treatments for Globus?

For many people with Globus, understanding the reasons for their symptoms may be all that is required. For others, various treatments may be suggested including:

Often, the reassurance that there is nothing more sinister causing the symptoms is all that is required for patients’ peace of mind. Things that individuals can do to help themselves include: 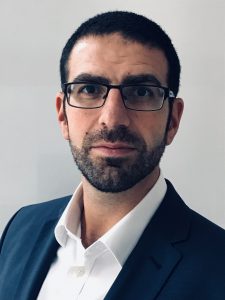 Mr Theokli is an Ear, Nose and Throat (ENT) Specialist with over 10 years of experience working in this field. He treats a great range of conditions for both adults and children including tonsillitis, glue ear, nasal blockage, sinus issues, hearing loss, tinnitus, dizziness and has a specific sub-specialist interest in conditions that affect the throat, voice and neck lumps.

He currently practices as a Consultant at the East Kent University Hospitals and is the surgical thyroid cancer lead for the Trust. His private practice is based at One Ashford Hospital in Kent.

To book a consultation or learn more about the services we provide, contact the hospital direct on 01233 423 303 or email us