Ear infections may be more common in children than in adults, but adults are still susceptible and, unlike childhood ear infections which frequently pass quickly, adult ear infections can be signs of a more serious problem.

We asked Mr Ananth Vijendren, Consultant ENT Surgeon with a sub-specialty interest in ear-related diseases, balance and hearing reconstruction, to talk us through different types of ear infections and when a specialist should be consulted.

What are the different types of ear infection?

The ear serves two main functions, hearing and balance, and is formed of the inner, middle and outer ear. The symptoms of an ear infection will depend on where it occurs.

An outer ear infection is also known as otitis externa. An outer ear infection often starts as an itchy rash and the ear may become painful, red and swollen. An outer ear infection is sometimes called swimmer’s ear because it often starts as a result of water that remains in your ear after swimming or bathing. The moisture becomes a breeding ground for bacteria. If your outer ear is scratched or if you irritate the outer lining of your ear by putting your fingers or other objects in your ear, a bacterial infection can occur. This is usually treated with eardrops that contain anti-inflammatory and antibiotics. It is important to keep your ears dry using cotton wool impregnated with vaseline when you shower or take a bath. Occasionally, you will need to be referred into ENT to have your ears cleaned through a process known as microsuction.

The middle ear is the area immediately behind your eardrum. An infection in this area is known as otitis media. Along with an earache you may sense pressure, or fullness, in your ear. You may have a fever and you are likely to have troubled hearing until the infection starts to clear. Most middle ear infections are viral and clear on their own accord however, occasionally they may be bacterial and require a course of oral antibiotics if not settling. Sometimes, you may need a surgical procedure to insert grommets to relieve the pressure and infection. Rarely, the infection can spread to the bone behind your ear, termed the mastoid bone, and even to your brain.

An inner ear infection is a misnomer, as they tend to be a case of inflammation rather than an actual infection. Most patients suffer with dizziness, nausea and vomiting that tends to settle with bed rest, lots of hydration and anti-sickness medications if required. If they persist for longer than 10 days, you should seek advice from your GP or look to be referred to an ENT surgeon.

What are the usual causes of an ear infection?

What does it mean if a middle ear infection is recurring?

Some patients have persistent ear symptoms such as discharging ear, muffled hearing, tinnitus and dizziness that last longer than 3 months despite repeated courses of antibiotics and other forms of treatment. This can be due to chronic otitis media, which can have serious implications.

What can happen if chronic otitis media does not receive proper treatment? 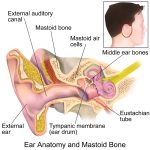 Chronic otitis media can result in inflammation in the middle ear and mastoid bone. The mastoid bone, located just behind your ear, contains air cells that have gradually developed from birth and is postulated to have a role in ventilating the ear when you go up and down heights. Chronic inflammation in this area can result in the destruction of the hearing and balance mechanisms as well as cause a paralysis of the muscles of the face through damage to the facial nerve running in your ear. Symptoms are prolonged discharge, hearing loss, ringing and occasionally balance issues. Occasionally, there may be a superimposed acute infection where the ear can be propped forward and there may be a boggy swelling. This usually requires prompt in hospital treatment, usually with intravenous antibiotics first and surgery as an adjunct should things not improve.

Chronic otitis media can also be caused by cholesteatoma, a growth that can develop in the middle section of your ear, behind the eardrum. A cholesteatoma is slow growing and may present initially with hearing loss followed by an ear discharge that does not settle with topical or oral antibiotics. The treatment of choice for cholesteatoma is mastoid surgery.

What does mastoid surgery involve?

There are many types of mastoid surgery and your ENT surgeon will advise which is the most appropriate for your condition. They are really just different approaches with the same aim: to remove the disease while limiting damage to balance organs and facial nerves and preserving hearing.

The operation can be done as a day case procedure under general anaesthetic. An incision is usually made in front or behind the ear to access all areas of the outer, middle and inner ear as well as the mastoid bone. The surgery is usually performed using a combination of high-definition endoscopes and an operating microscope under high magnification. Patients will be able to go home 2-3 hours after the procedure and are usually advised to take two weeks off work.

Spine and Back Pain Unit

Neck and Back Pain