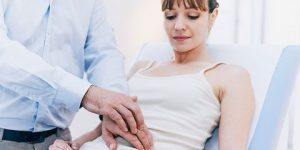 As our expert, we asked him the key facts to help patients with their concerns.

Endometriosis is a unique condition whereby growth of tissue similar to the lining of the womb exists outside of the uterus, for example at the ovaries, fallopian tubes, or overlying the lining inside the abdomen.

It most commonly happens within the lower part of the abdomen next to the womb but they really can be anywhere within the body. It therefore means that around the time of a woman’s period, inflammation and bleeding happens at the places where there is endometriosis and this can cause problems.

There is another condition called Adenomyosis. This is very similar to endometriosis but these tissue occur within the muscle of the uterus itself, causing periods to be extremely painful.

Who is it most likely to effect? Does it develop at a certain age?

Endometriosis is estimated to affect one in ten women. It most commonly affect women between the age of 20 to 50. Although the true origin of the condition may start at an early age, it tends to only become a significant problem when women has had many years of having periods, so it is rare to see it in women younger than 17 years of age. It also almost no longer becomes a problem after women goes through the menopause.

What are the symptoms?

Many women who have endometriosis do not have troubling symptoms at all. The most common problems are very heavy and painful periods. Sex can be very painful and this pain can sometimes carry on for hours or days afterwards. Sometimes the pain is so bad that it causes women to feel physically exhausted all the time.

If endometriosis happens at the bladder or bowel, women sometimes also report bloating and pain on opening bowels or passing urine around the time of having their periods. These women may look forward to actually having a period because there is a drastic relief after a period.

Unfortunately, many of the symptoms described above are considered ‘normal’ to a certain extent. As such, it is sometimes misdiagnosed as just normal period pains or irritable bowel syndrome, or just being really tired because of general stress. This may be true anyway but one should consider seeking medical advice if it is really affecting the quality of life.

What impact can it have on health?

Women suffer in a variety of way. Endometriosis in itself is completely benign, meaning they almost never become cancer. But the nature of the disease may mean that women struggle in silence and this can have an impact on physical performance and sometimes mental health. The fact of having severe pain frequently can also mean women cannot do the exercise they wish to in order to stay healthy.

Are there any impacts on pregnancy?

What is the process to get diagnosis? Are there any tests involved?

What are the treatment options?

Depending on the circumstances and severity of the symptoms, it is not unreasonable to do nothing even if one is known to have endometriosis.

If fertility is not an immediate issue, hormonal contraceptives are very effective in treating endometriosis.

Alternatively women may choose to have a laparoscopy for diagnosis and treatment at the same time. There is also the option of having a hysterectomy if all other options are unacceptable or have failed.

How long would it take from diagnosis to treatment?

Perhaps because of the normalisation of many of the endometriosis symptoms, studies have shown that it can take many years from when a woman first sees a doctor to ultimately getting a diagnosis. Population studies in the UK have found that it can take up to 8 years. Studies from other countries like Norway and Germany have shown a similar trend.

Are there any lifestyle changes patients can make to help?

No, not really. Women sometimes adjust their life and work around their periods because of this. If dietary changes makes a difference, there is no harm trying this, but there is no research evidence on dietary changes improving endometriosis symptoms.